We’re fortunate in Greater Boston to have the foundation for a strong regional transit system—a subway system in the urban core, mature MBTA and Regional Transit Authority bus lines, and an extensive Commuter Rail network covering everything from diverse, mid-sized cities to tony suburbs. The full system yearns for a range of improvements, however, like providing more regular service outside of rush hour so that it better serves residents who don’t work traditional 9 to 5 schedules. Here we’ll focus on one exciting model for change: the imperative (and promise!) of transforming our Commuter Rail system into a “Regional Rail” system. That is to say, a more equitable, modern, fast, zero-emissions rail network that responds to how people live today and well into the future. 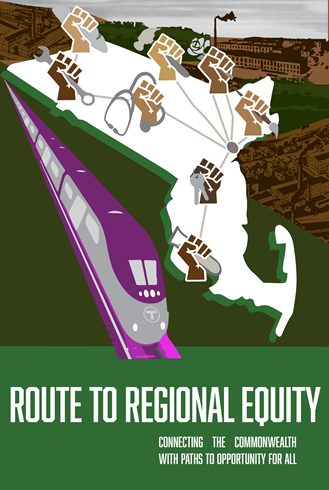 Even though we have an established, built-out Commuter Rail network that would be the envy of most U.S. metro areas, our system has become expensive, slow, infrequent, and often unreliable. Our failure to modernize the operations of this mid-20th century system has meant that it primarily serves white-collar rush hour commuters, leaving low- and moderate-income residents behind. And it has contributed to increased dependence on single-occupancy vehicles and some of the worst traffic in the nation before COVID-19 arrived. Our struggling rail system was a drag on our region prior to the pandemic, and building it back better is now absolutely essential to support a just and equitable recovery.

One very real short-term challenge is that Commuter Rail ridership has dropped over 90 percent during the pandemic, as many (although not all) of the riders for whom the current system was designed have been able to shift to remote work. Importantly, though, lines running through environmental justice communities like Haverhill, Lynn, and Brockton have maintained some of the highest shares of pre-pandemic ridership in recent months. While these communities never had the highest absolute ridership levels—due in large part to expensive fares and infrequent service outside of rush hour—this suggests that the system nonetheless provides a baseline public good that has real potential to expand.

Recent improvements to the Fairmount Line serve as a promising example of small steps already taken toward this Regional Rail vision. The Fairmount Line runs south out of Downtown Boston and serves some of Boston’s lowest-income neighborhoods that have historically been worst served by public transit. Starting about ten years ago, the state, with lots of support from neighborhood advocacy and outside philanthropy, made a series of infrastructure improvements to an existing rail line, added several new stations, and now runs trains more frequently and at lower fares than on most other segments of the Commuter Rail. There are many improvements still to make, but increased off-peak frequency along the Fairmount Line led to a tripling of ridership over a five-year period. The Fairmount experience offers proof of concept for future efforts. 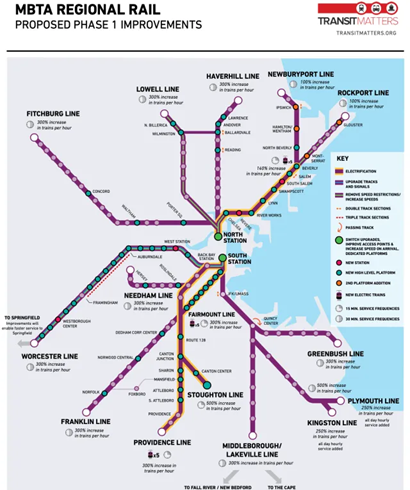 Recent developments have made transformation to Regional Rail all the more urgent. First, during the pandemic rents and home prices have increased everywhere in the region other than downtown Boston. This suggests increased demand for living outside of the urban core, partially driven by shifts to remote work that are likely to remain in place to some degree even after widespread vaccination. Second, the legislature just enacted a requirement that all cities and towns with an MBTA station (including Commuter Rail) legalize multifamily housing production in at least one district near that station. If implemented thoughtfully, this could lead to an increase in much-needed diverse housing options that would in turn increase demand for high-quality transit service, like Regional Rail. And, third, without proactive interventions, there’s reason to be concerned about pre-pandemic traffic levels returning very soon. In fact, traffic west and north of Boston is already two thirds of what it was pre-pandemic even while much of our local economy remains relatively shut down.

A Regional Rail transformation is ambitious, but it’s absolutely within reach. The MBTA’s Fiscal Management Control Board itself endorsed a vision for Regional Rail back in late 2019, and many such regional rail networks run successfully in other parts of the world. The Transportation Dividend, released by A Better City, The Barr Foundation and the Boston Foundation back in 2018, estimated that our full regional transit system generates roughly $11 billion in economic benefit every year. While implementing Regional Rail would require real front-end investments, these would be paid for over time not just through higher ridership leading to operational efficiencies and indirect economic benefits like shortened travel times, but also from increased tax revenue from growing local businesses around more thriving train stations and by increased property tax revenue from new residential development that would follow.

Additionally, while the federal government is rightly focused near-term on economic and public health recovery efforts, it will need to transition to economic stimulus efforts later in 2021 (i.e., the “Build Back Better” portion of President Biden’s proposed two-part economic strategy for 2021). These efforts may well include new transportation funding for states and localities, and having plans for shovel-ready infrastructure projects like those central to Regional Rail would position us well to receive and spend that new funding as soon as the opportunity arose.

Finally, we need not implement the full Regional Rail vision all at once. This past summer TransitMatters released Laying the First Tracks Toward Recovery, which provides practical steps to start implementation over a five- to seven-year timeframe including steps that could be taken within a year. This plan includes things like running trains every 15 minutes all day on the Providence, Boston-to-Beverly, and Fairmount Lines and beginning electrification on several priority lines.

Greater Boston faces a massive challenge: What will our future look like? Will it be a region hamstrung by gridlock with electric vehicles stuck in mind-numbing traffic? Will our once vibrant and diverse Main Streets see their small businesses replaced by giant chain retailers that can better handle delivery fees? Will our Gateway Cities continue to see disinvestment and “brain drain”? Regional Rail alone won’t fix all of these problems, but it can be a significant catalyst. It can give suburban commuters zero-emission transit options. It can support the kind of density needed to give our smaller downtown Main Streets a leg up. It can also revitalize Gateway Cities by making them attractive places to live AND grow a business—not mention put tens of thousands of Gateway Cities residents into good-paying jobs. We can shape a cleaner, more equitable future if we make the critical plans and investments for tomorrow today.

Read more proposals in the Seizing the Moment series.